Key facts for those moving from Edinburgh to London

The size of London 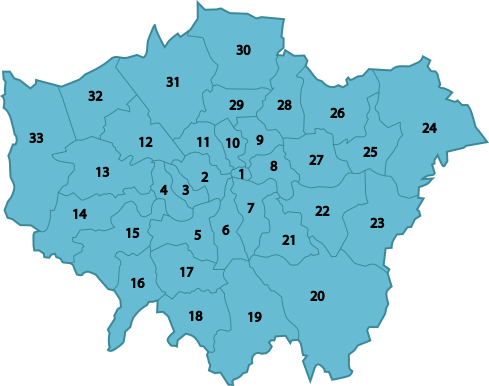 (Image has a Creative Commons licence. Click on it for the details.)

London possibly conjures up a few stock images in your head, the Thames, the London Eye, the Houses of Parliament, Beefeaters, the Tower of London, etc. In fact, it is very diverse place, which is not so surprising when you consider how many people live there. Greater London has a population exceeding that of the whole of Scotland and more than ten times that of the wider Edinburgh area. In what follows, assume that ‘London’ refers to ‘Greater London’. The City of London is by far the smallest LA area by population and extent. It only has some 7,000 residents according to the 2011 census and covers only 1.12 square miles. Often referred to simply as ‘the City’ or ‘the Square Mile’ it is the heart of the UK’s financial services industry. The City of London will not be discussed elsewhere in this article as so few people live there. It is highly unlikely that if you are moving from Edinburgh to London you’ll end up there!

The next smallest LA, by both land area and population, is the borough of Kensington and Chelsea, just over four times as big as ‘the Square Mile’ but with over 22 times as many inhabitants, according to a 2013 estimate. According to the same estimate, the largest borough by population is Croydon, with 372,752 inhabitants. However the largest by area is Bromley, which covers almost 60 square miles, almost 60% the size of the whole of the City of Edinburgh local authority area!

The GLA’s Ward Profile and Atlas: An invaluable resource for those moving from Edinburgh to London

The Greater London Authority’s Ward Profile and Atlas will be an invaluable resource for people moving from Edinburgh to London. It provides much finer detail than the websites listed above, as it furnishes information on individual wards, which are the units into which boroughs are broken down. It is ‘designed to provide an overview of the population [for each ward in Greater London] by presenting a range of data on the population, diversity, households, life expectancy, housing, crime, benefits, land use, deprivation, and employment’.

By consulting it you can find out such things as the lowest rate of violence against the person in 2014/15 was in the ward of Upminster in the borough of Havering, whereas the highest rate was in the St James’s ward of the borough of Westminster (some 32 times higher).

The Guardian discussed this resource in 2009 in an article which could serve as a handy introduction. (However it seems that the interactive links no longer work, so you are best to go directly to the GLA site if you want to interrogate the database.)

Best and worst aspects of every London borough

Thrillist London provides a fascinating and entertaining compilation of the best and worst aspects of every London local authority area. (It’s entertaining because of the way they comment on a potential link between each area’s worst and best aspects.)

We highly recommend you visit this site for yourself, but to give you a flavour of it here are the best and worst aspects of five boroughs (with Thrillist’s commentary omitted – imagine your own and then compare it with theirs!):

Moving from Edinburgh to London and want to live a long time?

In 2015 ITV published an article on longevity in the various London boroughs. Kensington and Chelsea came out top and Tower Hamlets and Barking and Dagenham came out bottom, but in general people in London live longer than in the rest of England (and Scotland).

Both Scotland and London voted to stay in the European Union, but it’s interesting to see the distribution of Europhilia/Euroscepticism within London. According to a 2016 YouGov poll, the borough of Havering was the most Eurosceptic area in the whole of the UK, whereas Lambeth was the fourth most Europhile (after Ceredigion, Aberdeen City and Stirling)! Depending on your opinion on Brexit, you may prefer to live in one or the other!

Last but not least!

Whichever borough you are moving to, we suggest you get a free quote from 1stMovers to help you get there! We offer a ‘man with a van from Edinburgh to London’, and many more services, including professional piano removals!